SUBMERGED STORIES OF THE SACRED LAKE 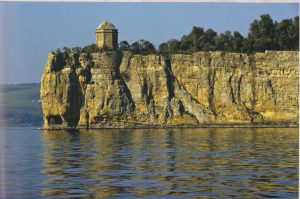 If there were a patron saint of forgetfulness he could also apply to be the patron saint of Lake Bolsena. There are reasons galore, not least the loss of historical memories for the prestigious past of this lake, the second largest volcanic lake in the world. For millennia, the lake, its depths and its wide banks have created a basin rich in minerals, flora, fauna, fish, hot springs, fertility and life. It is a settlement site of one of the oldest prehistoric civilizations of Italy (the RINALDONE culture) which sowed the seeds from which would rise the Etruscan and Roman nations.

There are many stories, important but submerged, making up the past of Lake Bolsena, an epicentre of civilization deeply linked to the origins and development of the process of formation for ancient Italy. However, we need to add that if today the lake is still a wonderful witness of its past, this may depend on the beneficial influence of a host of divine figures, Christian and pre-Christian, that were its patrons, from prehistory until the Christian Middle Ages. These various divine figures, all of the female gender, were the patrons of the lake for long ages, and they were the root cause of the sacralization of the lake, since prehistoric times. In those primordial times, there was the cult of a great fertilising goddess of earth and water. From that remote cult, in historic times, descended the Etruscan Turan, Uni and Voltumna, the Etruscan-Roman Fortuna, and then Saint Cristina, the Christian patron saint of “waters”, the Queen of the Goths Amalasunta, Saint Martha, Saint Margaret and Saint Mary Magdalene.

There is no doubt that an archetypal icon of the feminine principle has had the lake as its favourite seat.

The most ancient and unique monuments that bear witness to the sanctity of the lake are now underwater because of rising water levels, and date to around the tenth century BC. There are four giant mounds (known locally as the “flower beds”), erected for purposes yet unknown, on each of the four sides of the lake, each mound being over a thermal spring. These are mysterious works, probably designed to “mark out” the whole perimeter of the lake with a foundation ritual.

According to scholars of the History of Religion, the oldest expression of human religiosity is the pilgrimage, and this is understandable since the first communities were nomadic and, once strategic locations and nerve centres were identified for their travels, they were to become the first sacred places: and in many cases these were lakes and mountains. The lakes were associated with the land and the lowlands, and the mountains with the upper world and heaven.

It is clearly no coincidence that the annual pilgrimage to the Etruscan sacred lake became in later times the biggest Christian pilgrimage, known as the Via Francigena: the way to Rome, the Crusades and Santiago de Compostela. The Francigena enters the crater of Bolsena in San Lorenzo Nuovo and leaves it from the heights of Montefiascone.

The western side of the lake guards other great forgotten stories that are only recently emerging from the distant past. 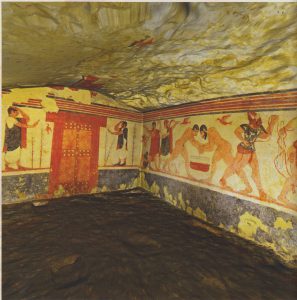 To the west of Bolsena, in the Tuscany region, there have been archaeological discoveries of great importance, and it is easy to think that in the rest of the region around the lake, other important discoveries will reveal the emergence of a mythical past, both surprising and relevant to the present for what can be transmitted down to us. The area to the west of the crater of Bolsena is crossed by a halo of deep volcanic ravines, which run down the valley of the river Fiora. The middle valley of the Fiora has always maintained close contacts with the neighbouring area of the lake, but it is a land of cliffs, gorges and steep spurs of tufa, and through its harsh inaccessibility it has been possible to preserve unique and rare works from prehistoric times to the Etruscan period.

Recent discoveries made both in the Bolsena area (the Landro hills) and in the adjacent valley of the Fiora (Poggio Rota) create a new vision of the ancient world, Etruscan and pre-Etruscan, focused on what we might call a “sacred science” or rather something that is a science and at the same time a sacrality of the land and the environment.

We know that the Etruscans had a large number of sacred books which were written in hieratic characters, the traditional rules for interacting with the gods who ruled over creation, interpreting the manifold “signs” of God, present in the celestial phenomena, in the behaviour of animals and in any natural manifestation. A doctrine, the Etruscan Discipline, handed down orally for centuries and only at the end transcribed in written texts  – which, unfortunately, have been lost. Records remain of many of their titles, however, and these still give us an idea of the range of the knowledge and interests in the Etruscan world.

But what has been discovered recently in Bolsena and the valley of the Fiora?

It’s the kind of discovery where you know that at first they will be fiercely ignored, denied and ridiculed, because they are not comprehensible to modern “rationalist” thought. Next they will be tolerated, with some discomfort, and then, finally, everyone will say they already knew about it… “Discovery” is a question of who knows first, who knows second, and who never knows. In the valley of the Fiora an extensive grid of straight lines has been identified: lines that align with each of the main ancient sites in the region, both Etruscan and pre-Etruscan. In more than one case the alignments are all in high places and Etruscan temples and “observatories” of the sky and earth have been reconstructed, dating from Neolithic times (Third millennium BC). The alignments of the Fiora valley continue, touching the major Etruscan temples located within the crater of Bolsena. The “grid” is very broad and was built over several millennia. It is the tangible and measurable sign of an elaborate project of foundation and territorial settlement, carried out by people and civilizations much more advanced than we think.

A system of grid alignments, similar to the one described, has already been identified and studied in the United Kingdom, and it is also similar to that found in the Peruvian Nazca desert. A similar system is still handed down in China, where, according to the tradition of Feng Shui, along alignments called “dragon paths,” there flows the energy of the earth, the influence of which is essential for human life and the natural environment. The ancient peoples spent thousands of years living in a continuous symbiotic dialogue with Great Nature, knowing directly, without technological filters, the powers, the spirits and the mysteries of what they considered a great creator goddess: the giver of life, death and rebirth.

The alignments in the Bolsena area, the British “ley lines”, the Andean Inca “ceques”, the Eastern “dragon paths”, were not made for military purposes or for normal traffic, and this is one of the reasons why modern “scientists” and “experts” will often deny their existence, because they do not see them, because they does not understand their function. Even though it certainly has some aspects which are still unknown, it is rather obvious that it had a sacred aspect, related to the cult, as well as an element of observation of the sky and celestial bodies.

A new vision emerges: a people of 5000 years ago that started a project of wisdom, spirituality and art, using the earth and its places as a stage, linking them together with alignments that reproduced the lines marked on the ground by the motion of the sun in the sky and other celestial bodies.

The vision of a society that for many millennia cooperated with Great Nature and its creative power is revealed today as a kind of challenge and admonition to the current society, that destroys the environment and denies any other power that is not the human.

Is it only the “primitive” who believe that Great Nature is animated by a creative power equal to that of a great goddess, and therefore to honour her according to the rules of a sacred science?

3 thoughts on “SUBMERGED STORIES OF THE SACRED LAKE”